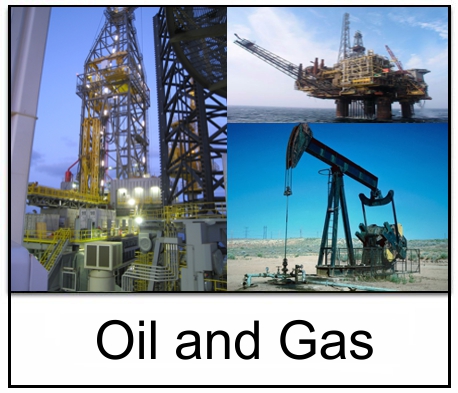 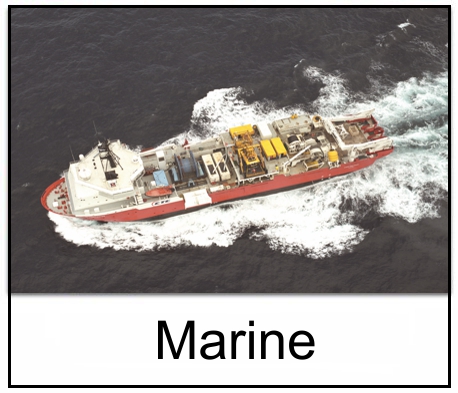 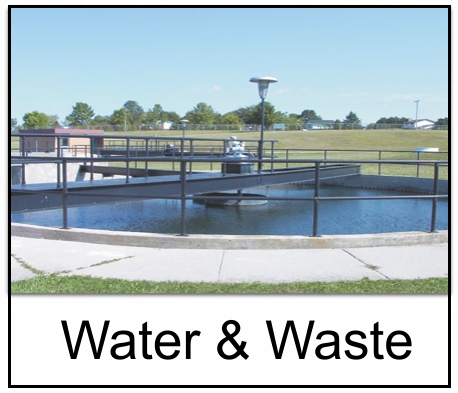 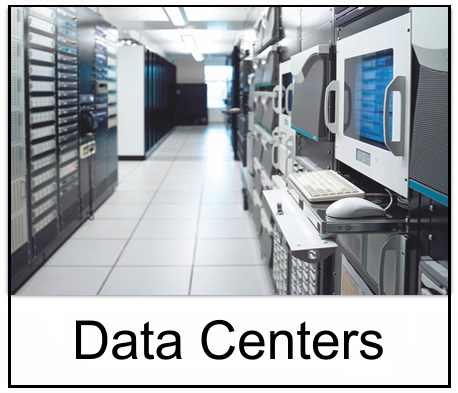 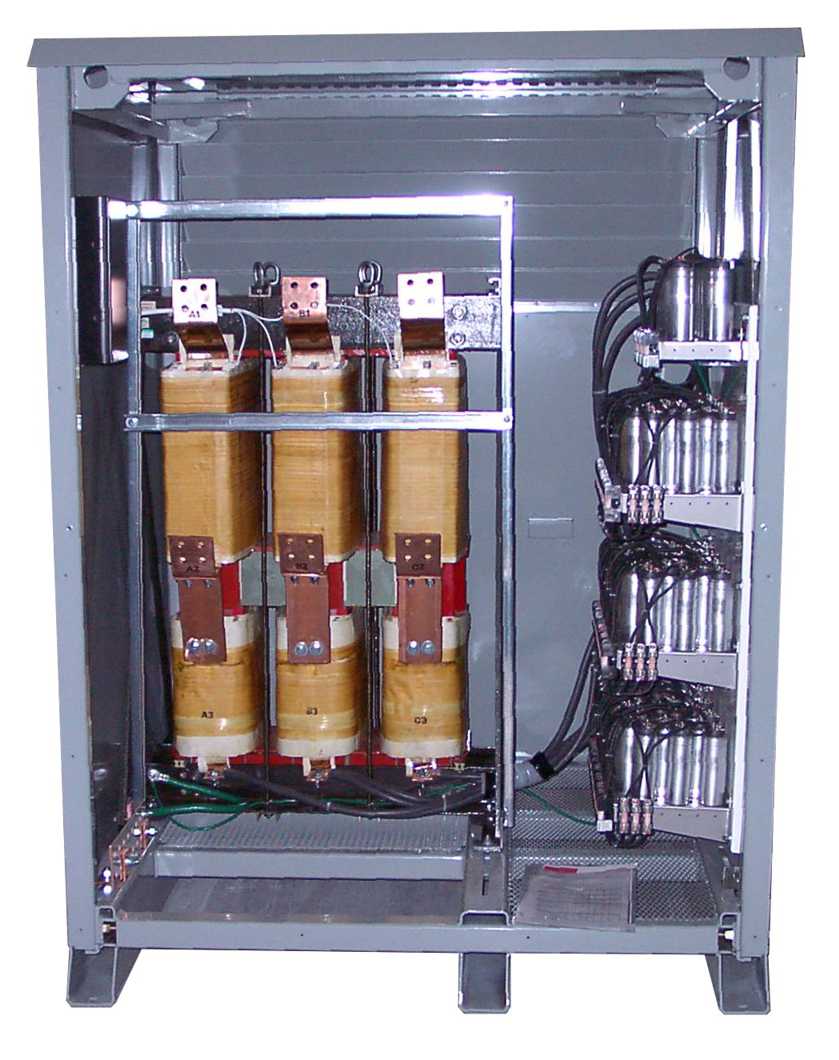 The LINEATOR™ Advanced Universal Harmonic Filter (AUHF) is a revolutionary advancement in the area of passive harmonic mitigation. No other device on the market can meet the stringent limits of IEEE Std 519 at an equivalent efficiency, size and cost. When your application calls for a truly cost effective harmonic solution, the LINEATOR AUHF is the logical choice. It provides Engineers with a standard off-the-shelf solution for what used to be a very challenging engineering problem.

The LINEATOR is a purely passive device consisting of a unique inductor combined with a relatively small capacitor bank. It’s innovative design achieves reduction of all the major harmonic currents generated by VSD’s and other similar 3-phase, 6-pulse rectifier loads. The resulting ITHD is reduced to <8% and and is now available in a model that achieves <5%. Although referred to as a filter, the LINEATOR exhibits none of the problems that plague conventional filters. 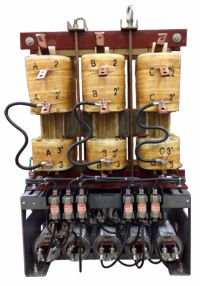 The Lineator High Performance (HP) model is used where the highest power quality demands must be met. Lineator HP outperforms active filters in efficiency, with gains of 2 per cent or more. It is more reliable and easier to maintain than any of the complex AFE drives or active filters currently available.

Specifying the Lineator HP for applications with standard 6-Pulse ASD’s provides end-users with low harmonic drive systems at 20 to 30 per cent less in capital costs than other solutions. Operating costs are also significantly lowered due to the higher efficiency gains.

In addition to all the benefits of the Lineator AUHF, the new High Performance HP model offers < 5% ITDD. With the addition of a tap to allow for reactor impedance adjustment, current distortion levels of < 5% can be achieved without introducing excessive voltage drop or ASD instability. 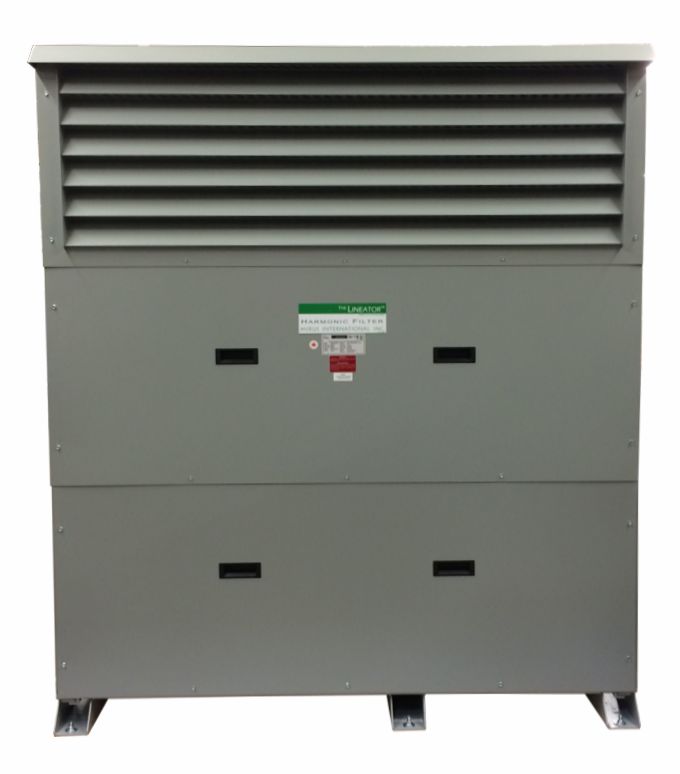 For extreme environments, such as excessive background voltage distortion (5% to 12% VTHD), high ambient (up to 55º C) or high elevation (above 3000 ft), Mirus now offers an extreme duty model for its Lineator AUHF. Our standard Lineator AUHF already outperforms any other competitive filter by guaranteeing performance when background voltage distortion is as high as 5%. In some applications however, such as marine vessels, drilling rigs and oil fields equipped with electrical submersible pumps (ESP’s), existing voltage distortion levels will often exceed 5%. Also, when ambient temperature levels exceed 40º C or at higher elevations where the air is thinner, a more robust filter is required. The Lineator-ED model will meet this challenge. 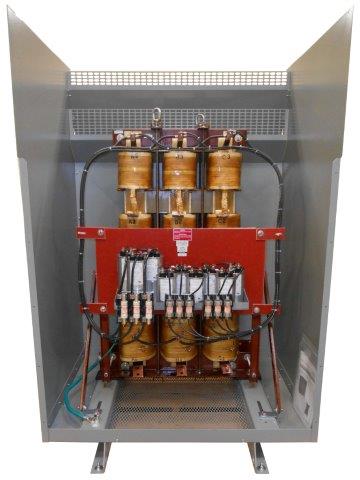 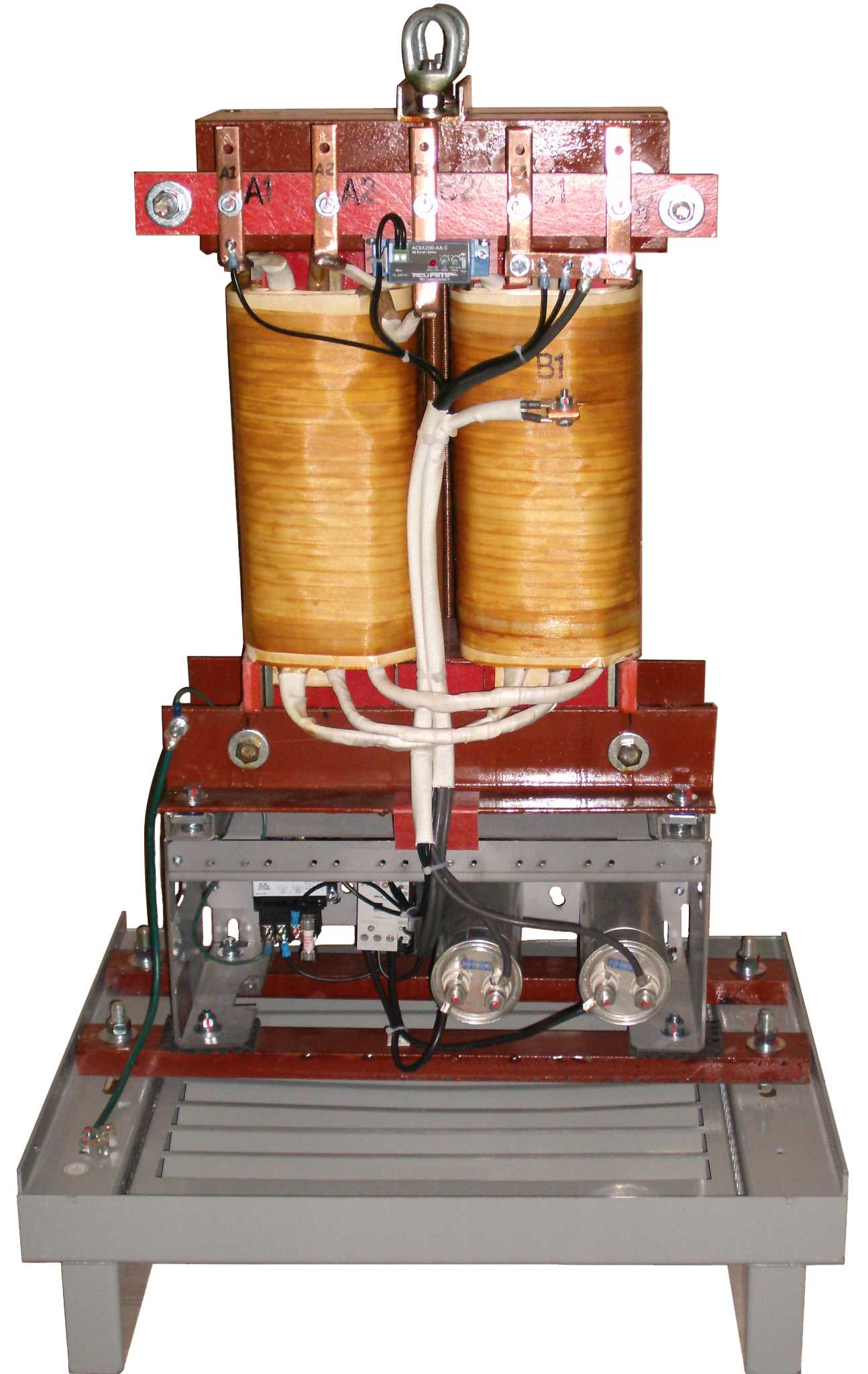 In remote locations such as farms, golf courses, oil and gas fields and residential areas standard 3-phase Variable Speed Drives are often used as Phase Converters to supply 3-phase motors when only 1-phase power is available. The Lineator™ 1Q3 is ideal for systems such as water and waste water, pump jacks, irrigation and many others.

The Lineator-1Q3™ has been designed to address this application by accepting 1-phase input and supplying a quasi 3-phase supply to the VFD. This will significantly lower both input harmonic current distortion (by up to 10x) and DC ripple current within the VFD. Reducing the ripple current allows for less derating of the VFD which, in many cases, will offset the cost of the Lineator-1Q3™. 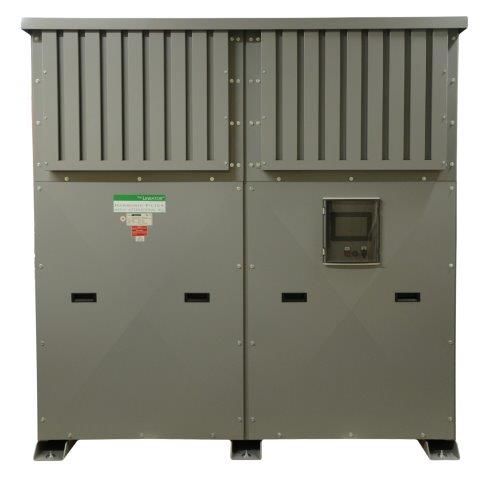 The Mirus Lineator wide spectrum passive harmonic filter, a well proven method of mitigation in offshore and marine environments, still remains the best technical solution to treat harmonics. It not only addresses all requirements to meet full compliance of certifying body harmonic distortion ‘rules’ worldwide, it is guaranteed to outperform all other passive and active solutions. The Lineator is now available in a hardened version specifically designed for severe marine and offshore applications.

Lineator can be maintained ‘on the run’

The Marine & Offshore Specific Lineator can be optionally configured for service and maintenance of the capacitors without powering down the reactor. A circuit breaker isolates the capacitor bank which is compartmentalized for safe access by qualified electrical staff. The system can temporarily operate on the reactor alone with reduced harmonic mitigation. This eliminates operational shut-downs thus ensuring your main propulsion, drilling operation and production is always up and running.

Note that even with all capacitors disconnected, the performance of the Lineator reactor alone will be as good as a 12 pulse system so it “will get you home” every time. 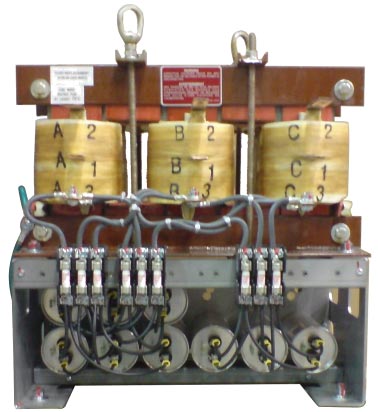 High dV/dT combined with a mismatch between cable and motor surge impedance can result in reflective wave phenomenon at standard induction motor terminals. Voltages can increase by as much as 2 to 3 times nominal peak levels possibly exceeding the insulation rating of the feeder cables and motor magnetic wire leading to insulation stress, partial discharges and eventual failure. This problem can result with short cable runs but becomes magnified with long cable runs.

The Inversine Advanced Universal Sine-wave Filter (AUSF) is designed to address the problems resulting from pulse width modulation. It is a low pass filter with cut-off frequency well below the switching frequency of the inverter.

The AUSF is much more than a simple dV/dT filter and will:

Common-mode is the phase-to-ground voltage that appears as a result of the instantaneous sum of the 3-phase voltages of the PWM inverter not being zero even when the sum of the average 3-phase voltages is zero. Common-mode voltages will induce common-mode currents to flow through parasitic capacitance in the motor and motor feeder cable. High frequency capacitive coupling exists across the motor bearings and between the feeder conductor or motor winding and ground. Common-mode currents can lead to premature motor bearing failure.

The Inversine Common-mode Filter option will: 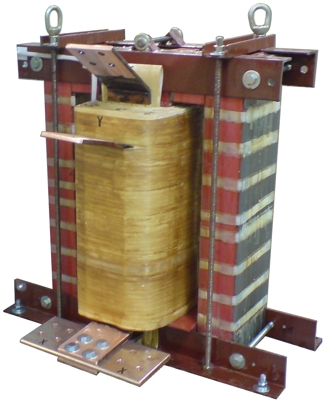 GENLINK DPNL is a multiple winding reactor that, when installed in the common neutral of paralleled sources either between the dissimilar generators or the generator and the utility supply, can greatly reduce the neutral circulating currents that result from the instantaneous voltage differences. These neutral circulating currents, which are predominantly triple frequency, have the potential to cause a considerable amount of damage with respect to overheating generators and causing false-protection trips. 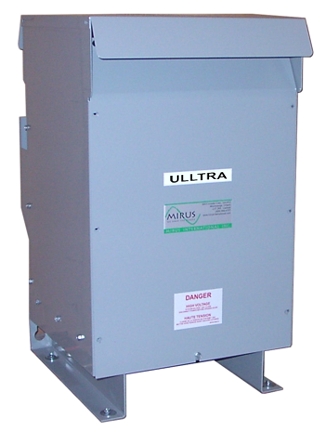 ULLTRA High Performance transformers are designed to deliver more energy savings than any other transformer on the market. The result is a high performing transformer that offers the highest efficiency in the industry under either linear or non-linear loading and maintains these high efficiency levels at not only 35% loading, but over the entire load range.

While other energy efficient transformers on the market may meet new, more demanding standards such as NEMA Premium and CSL3, these standards only restrict losses under linear loading and at 35% load levels. When it comes to higher load levels and non-linear loading, other transformers on the market can’t offer the same high efficiencies under these conditions. ULLTRA High Performance transformers actually exceed NEMA Premium efficiency levels at their peak performance loading of 50%, thereby assuring the most energy savings under any loading.

A perfect solution for any application where energy efficiency and lower life cycle costs are critical – K-12 and Higher Education, Government, Healthcare, Broadcasting, Commercial, Industrial and LEED buildings. Applications that expect heavier loads such as Data Centers, Solar and other Alternative Energy projects, will benefit from the ULLTRA Series Transformers’ ability to maximize savings under ANY load and for ANY load profile.

In applications where non-linear loading is expected to be severe, the ULLTRA-H1E combines the proven harmonic mitigating properties of Mirus’ Harmony™ HMT line with superior energy efficiency, low inrush, and low audible noise found in the ULLTRA design.

Configuration of the secondary windings cancels the fluxes generated by the triplen harmonics in the load current thereby minimizing triplen harmonic voltage distortion. Choice of phase shift permits cancelling of 5th and 7th current harmonics against those of other loads fed from the same primary supply.

Harmonics treated by the secondary windings are as follows:

A 3-phase, low zero sequence impedance autotransformer, which when connected near to and in parallel with the harmonic generating non-linear loads (usually connected at the distribution panel), provides an alternate path for 3rd, 9th, & 15th current harmonics (triplens) which the loads create. Patented Field Adjustable Impedance (FAI) feature allows for adjustment of NCE™ zero sequence impedance to field conditions.

A patented phase shifting autotransformer with a low zero sequence impedance at its output. When connected in series on a 3-phase, 4-wire service to non-linear loads, it provides an alternate path for the triplen harmonics. The CNCE™ also phase shifts 5th and 7th current harmonics by 180º so that they cancel with 5th and 7th harmonics from other loads on the distribution system. Optional FAI feature allows for removal of triplens from the CNCE™ input side as well as secondary.

3-phase, 3-wire autotransformers with 30°, 15° or 20° phase shift between input and output. They are connected in series with the supply to variable frequency drives, UPS systems, and other 3-phase rectifier loads.

By phase shifting against other similar loads, they reduce 5th and 7th or 11th and 13th harmonic currents at point of common coupling which, in turn, reduces voltage distortion as well.

Designed to replace standard drive isolation transformers, the Drive Tamer™ is built to not only withstand the harsh harmonic environment produced by Variable Frequency Drives (VFD), but to also induce cancellation of harmonics upstream and thereby reduce voltage distortion throughout the distribution system.

Multiple output auto or isolation transformers ideally suited for reduction of harmonics generated by VFDs or other 3-phase rectifier loads. 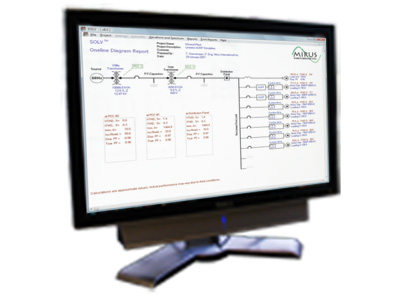 SOLV™ is a powerful simulation program that will calculate current and voltage distortion levels by simulating the Mirus Lineator™ and Variable Speed Drive (VSD) / Variable Frequency Drive (VFD) based on your load requirement. By simply entering some basic information about your source and VSD system, MIRUS’ SOLV™ will help you find the right solution for your VSD application by accurately predicting the performance level you can expect without the need of a costly harmonic study. You can download SOLV™ for free – download now!

SOLV™ also allows you to perform energy analysis by providing evidence of how energy can be saved by removing harmonic losses introduced by VFDs and justifying the use of Lineators based on energy savings. Its kW calculation includes all harmonic losses in transformers and cables and provides total kW, kVA and kVAR at the Point of Common Coupling (PCC), Distribution Panel in the Summary Report. SOLV™ eliminates the guesswork in evaluating the best performing solution for your harmonic challenges.

This software is a valuable tool for consulting and specifying engineers, utility operators, OEMs and anyone who needs to evaluate and compare solutions for treating harmonics in VFD applications. A trusted tool since 2004, SOLV™ is used by power quality professionals that represent a wide spectrum of industries including Oil & Gas, Marine, HVAC, Water/Wastewater, Industrial, Government, Education, to name a few.